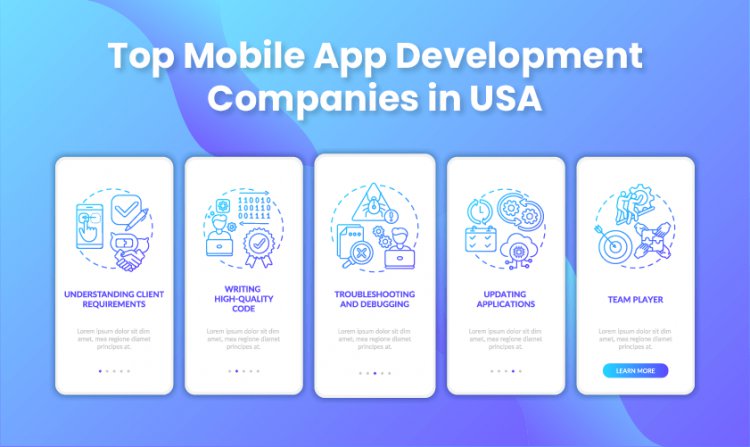 In this blog, we will try to identify the various processes that distinguish how the best mobile app development services USA work. Let’s start by breaking down application development into its components and working.

Mobile app development services is the process of producing and providing software applications that work on cellular (mobile) devices. The mobile development process consists of creating installable software bundles (code, binaries, assets, etc.) executing backend services such as data access with an API, and testing the application on target devices before deployment. Mobile applications run on a network connection to work with remote computing resources.

The two dominant platforms in the modern smartphone market are iOS platform from Apple Inc. and Android from Google. The iOS operating system powers Apple’s iPhone smartphones. Android’s operating system is not exclusive, it is used by Google devices and many other OEMs to build their smartphones and smart devices.

Although there are similarities between these two platforms when building applications, but iOS or for Android development uses different software development kits (SDKs) and different development toolchains. Apple uses iOS exclusively for its own devices whereas Google makes Android available to other companies provided they meet specific requirements such as including certain Google applications on their devices.

There are four major development approaches when building mobile applications

Native mobile applications are written in the programming language and frameworks provided by the platform and run directly on the operating system of the device such as iOS and Android. Native mobile application development requires a highly specialized skill set. There are many developer communities for C and Java worldwide, but there are few developers now who are knowledgeable in platform-specific versions of those languages and their respective IDEs. Skilled native app developers are in such demand, that many companies are hard-pressed to hire and retain them on staff, and instead they frequently have to resort to outside 3rd party design and development houses to build their apps for them.

Hybrid mobile applications are built with standard web technologies – such as JavaScript, CSS, and HTML5. They are bundled as app installation packages and work on a ‘web container’ which provides a browser runtime and a bridge for native device APIs via Apache Cordova.

Hybrid apps use web technologies of HTML5 / CSS / JavaScript and then encapsulate those web applications in a container that allows the web application to act like a native application on the device. Hybrid apps are web apps running on an embedded browser environment hence, most of the code from a web app can be used to build a mobile app. As rendering and runtime performance of mobile browsers are ever-increasing, hybrid development is a viable alternative for web developers who want to build mobile apps quickly.

PWAs are web applications that utilize a set of browser capabilities – such as working offline, running a background process, and adding a link to the device home screen –  to provide an ‘app like’ user experience. PWAs are written using traditional web application programming technologies usually including some variant of JavaScript, HTML5, and CSS, and are accessed initially through a browser on the device or computer.

Front end vs. Back end Development

In the early days of the modern smartphone applications era, mobile applications went through a similar evolution as first websites. Initially, applications and sites where wholly contained within themselves and acted like static advertisements for the brand, company, product, or service.

Then as connectivity and network capabilities improved, the applications became more connected to external data and information, and the apps grew dynamic as they were able to update their UI and content with data received over the network from queries to data sources.

Now, the mobile front-end applications rely increasingly on an integrated back-end which provides data such as product information for e-commerce apps or flight info for travel and reservation apps, for mobile games, the data may in the form of new levels or challenges and scores or avatars from other players.

Where iOS runs on asset number of Apple inc devices, Android is designed to run on many different types of devices from phones to tablets and televisions. Developers use a range of devices providing a huge potential audience for your app. For an app to be successful on all these devices, it should allow some feature changeability and create a flexible user interface that adapts to different screen configurations.

To facilitate you, Android provides a dynamic app framework in which you provide configuration-specific app resources in static files (such as different XML layouts for different screen sizes). Android loads the appropriate resources based on the current device configuration. So with planning and some additional app resources, you can publish a single application package (APK) that provides an optimized user experience on a variety of devices.

The mobile front-end obtains data from the back-end via a variety of service calls such as APIs. These APIs may be owned and operated by the same entity developing the mobile application. It may in some cases be controlled by a third party and access is granted to the mobile application via a commercial arrangement.

Developers may use a cloud services provider to handle all the back-end capabilities, so that they can maintain their focus entirely on the features and functionality of their app, without having to worry about scalability, security, and reliability.

The mobile front-end is the visual and interactive part of the application the user experiences. It usually resides on the device, or has an icon representing it that is visible on the home screen or is pinned in the menu screens of the device. The application can be downloaded from the platform app store, side-loaded directly onto the device, or can be reached through the device’s browser, as in the case for PWAs.

Depending on the app size and team size producing the app, there may be many different people involved in the design and development of the front-end mobile app. The team size can range from a single developer who does everything, to tens and hundreds of people with specialized skills.

There may be dedicated creative/graphics designers who are responsible for creating visual elements of applications like icons, backgrounds, colors, themes and other parts of the app. The team may also have user experience and user interface designs who work on the layout of the components, how they interact with each other and the user. For specialized games, a team may include motion graphics developers and even engineers who develop engines that govern the physics of how components move in the app, like a car in a racing game.

Regardless of the size of the team, a critical element of the development effort is building the app logic that is responsible for making network calls to the back-end services, retrieve data and update the data in the back-end systems with new information generated from the app.

These back-end services are typically accessed through a variety of application programming interfaces, most commonly known as APIs. There are different types of APIs, such as REST and GraphQL, and there are also a wide variety of means and styles of accessing them. While some back-end service APIs are available directly to the application through calls in the platform itself, many of the specialized services have to be integrated into the app via a software development kit, commonly known as an SDK. Once the SDK has been added to the app via the development environment, then the application can make use of the APIs defined in the SDK.

An example of a back-end service for a mobile front-end could be a database that contains information used in the app. To access the database directly, the mobile developer would require the network location of the database, the protocol for accessing the database, the credentials for authenticating and authorizing the data access, and the specific database commands needed to extract the needed data.

Alternatively, the developer can utilize a specialized API when interacting with the database; and may only know the parameters needed in a method call to get or update specific information. Sometimes mobile developers craft APIs themselves or use the API definition provided to them by the owner/operator of the back-end resource.

Typically, a REST API is used to interact with data sources on the cloud, such as a cloud database. A GraphQL API is also another option for developers, as it makes easy to work with backend data in a mobile application. GraphQL provides querying support through a single API endpoint, and a data schema that can be used to build and easily extend data models that are used in the app.

Back-end services are critically important for the success of the mobile application, in web and mobile app development companies, developers have several important architectural decisions that they must consider. These decisions include which services should they build themselves and which third party services they should leverage, and if they should run and maintain their own services. In smaller organizations they may take advantage of 3rd party services.

The answer is increasingly clear; to improve developer productivity and efficiency, mobile app programmers should only build their own services if they are highly specific to the domain of the application and embody unique intellectual property. Also, even for the services they build themselves, they should almost always leverage cloud-based services to build and maintain their backend infrastructure.

There are hundreds of cloud and 3rd party services that mobile application developers can leverage to speed up the development and delivery of their applications. By using a cloud service, locations no longer matter, as a business owner or solutions hopeful it won’t matter if there are any app development companies near me or far.

What is looked for is the services provided best. Note that only developers working in top ranking organizations like Appedology will be able to become an expert in each of these individual services because of the exposure they receive.

Hence good mobile developers look for a development environment that makes it easier for them to integrate, use, and consume the most commonly required capabilities into their application quickly and easily, while still preserving the freedom to take advantage of the many individual services available.

Let’s just list crucials in identifying if the company you have chosen can deliver as per your expectations, the more ticks the better:

As one of the fastest growing application development services, Appedology has the skills, the teams, and the resources to provide you all of the above and more. Call us to get a free assessment done and if we determine we can help your app dreams come true, you will be on the fast track to getting a solid, engaging application made that gives you ROIs even better than you planned.