Why Augmented Reality Games Could Be your Next Best Investment 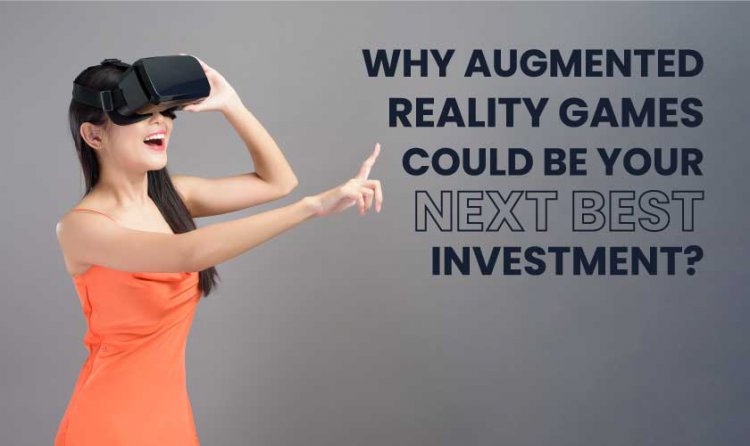 Would you believe AR technology isn’t as young as you might think it is? It was actually developed by computer scientist Ivan Sutherland, the father of computer graphics, in 1968 at Harvard when he created a head-mounted, AR display system. With the world leaning heavily on technology and the saturation of our patients due to the Covid 19 quarantines and restrictions, AR and VR games are changing the way we interact with our environment and help to stimulate us mentally. And that’s not the end of it! This revolutionary technology also will impact industries like retail, healthcare, e-commerce, marketing, education, military, and automobiles. AR is changing the way the gaming industry works, so it only makes sense to dive a little deeper into augmented waters and see how it will change the way we do things.

How does Augmented Reality Work?

Augmented reality or AR is an interactive experience where the objects in the real world are enhanced by computer-generated perceptual information, thus creating an environment that affects your senses including sight, hearing, touch, smell and somatosensory perceptions. Call it the real-time use of rendering digital data in the forms of images, sounds and other stimuli onto real-world objects. AR adds digital information to the camera of your smartphone, tablet or gaming system to create an illusion that the holograph is part of the real world. Unlike virtual reality (VR), you are not immersed in an artificial environment, but your existing reality gets additional three-dimensional objects, sounds, videos, and graphics to vamp it up.

AR is used in so many different ways, it can help you virtually try on clothes, glasses, shoes and accessories or see how new paint colors or appliances will look in your desk. You can even use it to make yourself look like a panting puppy or to find directions to the closest cinema house.  AR with the aid of device cameras collects, sends, and processes data in order to show digital content relevant to what the user is looking at by using:

The possibilities of augmented reality are infinite and combining it with powerful cellular device technology, AR will allow for geo-tracking abilities enabling IT admins to track real-time locations of roaming-users' devices (iOS, Android, Windows, Macs).  Augmented reality will definitely impact society in general, since it enables digital information to be superimposed and integrated into our physical environment, and considering how so many of us are till now self-contained at home during The Covid global pandemic, we can choose to transform our immediate surroundings into entertainment, work, and learning spaces using AR.

AR triggers computer-generated heightened restructuring of digital data on the player’s physical reality, and tangible objects in real time. This digital data could be 3D models, videos and even textual information. Augmented reality in gaming transforms the player’s existing environment into a virtual playing field, regardless of whether players use portable gaming systems, tablets, or smartphones.  AR can be defined as a system that fulfills three basic features: a combination of real and virtual worlds, real-time interaction, and accurate 3D registration of virtual and real objects.

What is the current augmented reality games market size and is it expected to grow? The global augmented reality market was valued at USD 2.882 billion in 2019, USD 7.6 billion in 2020 and is expected to grow to USD 29.5 billion by 2025; at a compound annual growth rate - CAGR of 31.1% from 2020 to 2025. It is also expected to register a CAGR of 55.8% over the forecast period. Augmented Reality will provide unique ways to expand retailers outreach and is likely to engage customers in exponential numbers. The growth will be steady, and investments from several business spheres are sure to follow.  The expected markets for AR will definitely be video gaming, but healthcare, retail, real estate, engineering, and live events amongst others will also want their share of the pie, using AR technology will significantly increase profits for businesses and will increase their customer bases.

Don’t make your game look flat AR games built using Apple’s ARKit technology, employ surface detection to position their game onto a viable surface in the gamer’s location e.g., the floor or a raised surface such as a table. Adding a sense of height to the game makes to visually aesthetic and can be used to build excitement. Your mobile device’s camera has a limited view, players must tilt or move the camera or themselves around to see the game better. Even small sized games can make good use of the vertical space for a sky effect, aerial firing or planes taking off.

Go Big Developers are more focused nowadays on producing large-scale AR games which can be enjoyed better outdoors or in a large space. This does not mean that small scale AR games are not enjoyable, but simply that using larger spaces for a game creates a more enveloping AR experience. The larger your play area, the larger your range to shift your cellular device to different angles and observe the game from various perspectives. The freedom of movement in larger game areas makes observing the game easier and is more exciting for players, especially if they are to work in teams.

Use Spatial Audio Spatial or positional audio, allows developers to place sound anyway in a game space. Using 3D positional sound enhances the gameplay especially for those games that make use of a large area. The closer a player gets close to a sound source the louder it becomes and the opposite happens as you move away. Spatial sound can also be used to locate objects, to show whether game elements are above, below or in any direction in relation to you. Without spatial audio, players will simply hear all audio sources in the game at the same volume, irrespective of their position in the game or distance from the player.

Create Realistic yet Extreme Visual Effects Visual effects like, explosions, lightning and environmental effects, look amazing in AR. Because these 3D visual effects are rendered in the real environment and can be perceived from different angles, players can easily have an irresistible draw to a game if the effects are realistic and larger than life.

Hand Fatigue Holding a device straight up for long durations leads to physical inconveniences such as fatigued hands. Developers must design games that can be played without players having to hold their cell phones directly in front of them for long periods, or make the game sessions shorter.  It’s obviously easier to design a game that is placed on a surface like a floor or a table, the user then holds the device facing down, which is less tiring. If your game is designed for children, hand and eye fatigue are very important factors to consider.

Why Appedology? Appedology didn’t just get to be one of the top digital solutions providers in the USA by sitting around. We have worked consistently to keep ourselves at par with our closest competitors and then kept moving ahead. Our core team of expert developers, analyzers and designers effectively keep their skills updated so that we can always offer you the best. Our focus is to listen to your goals, see your sketches and visualize them as complete renderings. We create custom content from a design and development prospective for augmented and virtual reality applications and games for you.  Appedology is your one-stop solution for bespoke AR and VR solutions, our team of game artists and programmers will easily share the story you want to tell through leading industry technological tools and software. We will engage your target audience through our custom VR experiences, AR apps, 360° interactive walk-throughs, and touchscreen content and keep them immersed in the immensity of their experiences. Appedology offers you

Have an AR Game design that refuses to let go of you? Come tell us. Let us assess how it works best for you and hey since it’s AR, the whole world is your playing field.

July 01, 2018
Appedology Is Here To Boost Your Real Estate Revenues

May 24, 2021
Android vs iOS apps and their development cost
CATEGORIES